Go Directly To Rewards
Welcome to the PledgeManager for Dracula’s Feast: New Blood!
If you missed our campaign, don't dismay! Just choose an option below.

Dracula’s Feast is a 10-15 minute game of hidden roles and logical deduction for 4-8 players aged 10 and up. Each player takes on the role of a classic monster at a masquerade party - Identify and expose everyone else... and keep all those juicy villagers for yourself.

Dracula’s Feast is a hidden roles game with no narrator, no ‘eyes closed’ phase, no player elimination, and no generic ‘villager’ role. Each character in the game has a unique ability - Doctor Jekyll can transform into a monster at the end of any of her turns, Van Helsing is here to hunt down Dracula, and the Witch is hiding from her neighbors.

Turns are simple - choose another player, and either:

Once you think you know who everyone is, you may accuse the party. If you've correctly guessed everyone's identities, you win! But if you get even a single guest wrong, you're exposed...and have likely given one of your opponents the information they need to win.

It's simple, fast, fun, and with 10 different characters who can be played in any combination, each game is totally different.

For more information on how to play, view the rules online.

Dracula’s Feast: New Blood improves everything you loved about the original. The second edition includes:

You do not need a copy of the first edition to play! Dracula’s Feast: New Blood contains everything you need!

"Dracula's Feast: New Blood was a wonderful little surprise. I'm not usually looking for social deduction games, but this one won me over with its potential for creative misdirection. This isn't simply a matter of figuring out which player is the baddie—instead, you get to juggle dozens of little hints and must pay attention to every player at the table. The resulting challenge is as hilarious as it is interesting." - Cole Wehrle, designer of Root.

Dracula's Feast is easy to learn and quick to play. It’s been played thousands of times over the last half-decade, and players are consistently impressed by the depth of play, constantly finding new interactions and tricks to stay one step ahead and avoid giving themselves away.

This is a logical deduction game with:

Visit jellybean.games to learn about our other projects! 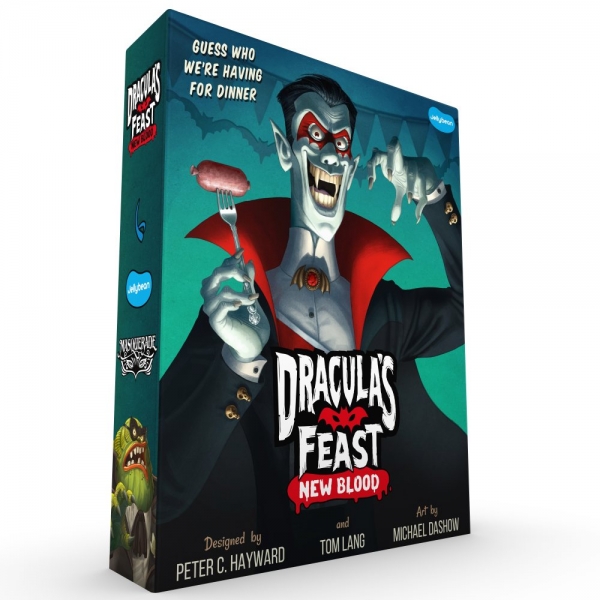 Get one copy of Dracula’s Feast: New Blood, including all stretch goals and promo items!