Go Directly To Rewards
Welcome to the PledgeManager for Meow! - a party game for 3-12 players!
If you missed our campaign, don't dismay! Just choose an option below.

or check out the rules here!

Meow! is based on Mao, the classic parlor game. You are cat cultists, competing to be the first to complete the ritual. Each game uses a small set of hidden rule cards - follow all the rules and win the game!

At the start of the game, you’ll only know your rules and the rules held by the player to your left. As more rules are broken - and revealed - you’ll learn more and more about what you need to do to win!

Be the first to complete every action in the game held by any player to win! But be warned: it’s not as easy as it looks…

At the start of the game, everyone draws a card (2 each in a 3-5 player game), looks at it, then passes it to the player to their left.

Each turn has three steps:

Play any card from your hand!

Take the action from the card you played, then try to follow every rule held by every other player.

Ask each other player if you’ve broken any of their rules. If you’ve broken a rule, the player holding it will read it aloud, and your turn ends immediately. (You only learn of 1 broken rule each turn!)

If you check with every player and you haven’t broken any of their rules, you win the game!

We're offering two different versions of Meow! on this campaign.

Splitting the game into two packs allowed us to provide two unique experiences with the same simple ruleset. Playing primarily with gamers? You'll want to use the red cards! Pulling this out with your family? Kitten Cabal it is!

Each game contains 50 unique rule cards, and the two versions can be mixed, allowing for endless replayability.

If you get both editions, you'll also get access to the promo pack!

Each game of Meow! only uses 13 cards, making this one of the most replayable games you'll ever buy! The more we raise, the more replayable it gets...

Thanks so much for your support! 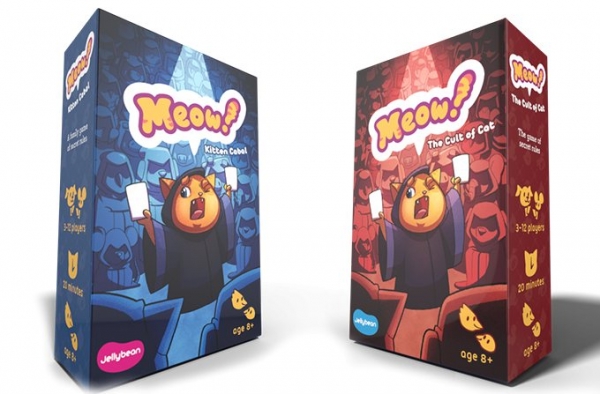 CABAL - One copy of both games!

Get a copy of Meow! The Cult of Cat (Red Box), Meow! Kitten Cabal (Blue Box), and the Promo Pack!