Go Directly To Rewards
Welcome to the PledgeManager for Village Pillage: Surf and Turf!
If you missed our campaign, don't dismay! Just choose an option below.

Hold onto your turnips, because Village Pillage is back, with two brand-new expansions:

Surf introduces a new type of card - Freebooters, who sail into your hand faster than ever before. Whenever you buy a Freebooter, you can then spend an additional turnip to buy another card (including another Freebooter!). But be warned - they’ll abandon ship at the first sign of trouble.

Turf brings a whole new set of villagers to the market (along with their animal pals), features cards that can affect the entire table (at any player count!), and introduces a brand new mechanism - Provoke! Provoke is the opposite of Exhaust - if your card is Provoked, you must play it next turn.

When you buy both expansions, you’ll get the promo pack, which includes the Golem, the Enchantress, and the ability to play the expansions with up to 6 players!

In Village Pillage, you're racing your neighbors to acquire 3 relics and prove your right to rule. Each turn, everybody simultaneously plays cards against both their neighbors. It's rock-paper-scissors meets the prisoner's dilemma...with turnips!

Kickstarted and released in 2018, the game immediately became a family favorite; it’s a robust filler, great for groups of all ages. But don’t take our word for it; this is what people are saying about the game:

"SUPER easy to pick up on, with enough rules to make it a satisfying play for more seasoned gamers. This is the lightweight, between-heavy-games game that I would use for pretty much every group I've played with. Takes only 5-10 minutes to learn, and only about 20 minutes to play. Lots of fun, lots of take-that action, and lots of ways to get what you need in different fashions by adding specific cards to your hand. The artwork is amazingly cool and whimsical, and the rules are easy to understand. Jellybean Games hit themselves a home run with this game. Bravo!" - DJZachLorton, BoardGameGeek

Over the last year, many people have asked us where they can get their hands on the juicy, juicy, Kickstarter-exclusive wooden turnips. Well, this is your lucky day! Just add $10 to your pledge (or select a pledge level that includes wooden turnips) and you’ll get a pack of 72 wooden turnips AND a beautiful metal chicken coin (for flipping)!

Surf not only provides a set of sea-faring scallywags, it includes extended game cards - play to four relics instead of three. If you’ve ever wanted your Village Pillage games to go just a little bit longer, these extended banks are exactly what you've been looking for!

We’ve spent more than a year putting these expansions together, and we know you’re going to love them! When we were designing Village Pillage, we wanted to make it the cleanest, most streamlined experience we could. As a result, the original game is one of the most quick-to-learn, accessible games you’ll ever play.

For the expansions, we let ourselves get a little weird. The game is still fun, fast, and easy-to-play, but we added Villagers who sacrifice themselves, or let you steal other player’s cards. Raiders who steal turnips in the double-digits, and Merchants which turn your other cards into turnips.

We also listened to what people wanted - interaction across the table, reasons to care about what every player is doing and, of course, more villagers.

We’ve playtested Surf and Turf with experienced village pillagers and new players alike, and everyone agrees: these two turnip-tastic expansions add everything you ever wanted from Village Pillage and more!

To learn how to play the original Village Pillage, check out the Rules Girl video:

Provoke, added in Turf, is the opposite of exhaust - when a card is provoked, it must be played again next turn. You still get to choose which side to play it, but that card is coming out again! The Circus provokes opposing Raiders, the Poacher provokes the Farmer it just robbed, and the Kennel even provokes itself!

Some cards in Surf & Turf can affect more than the card they're up against - they can care about your neighbor's other card (Petting Zoo), help out every Farmer on the board (Beekeeper), steal from every Wall (Ravenmaster), or exhaust EVERY card played this turn (Viking).

For the first time, cards move between villages! The Wild Goose can be stolen by Raiders, going to the hand of the neighbor who attacks it, and the Pied Piper is a Turf merchant who will steal your opponent's card if unable to afford a relic.

Every card in the Surf expansion is a Freebooter! These scurvy seafarers will join your village and bring their friends as well; after you take them from the market, you may immediately pay another turnip and gain another card from the market. More villagers = more pillaging!

For $18, you’ll get BOTH expansions, plus any promos and stretch goals we unlock!

Each expansion adds a unique experience, and setup is easy - just shuffle them into the market card deck. You can even play with both at once! 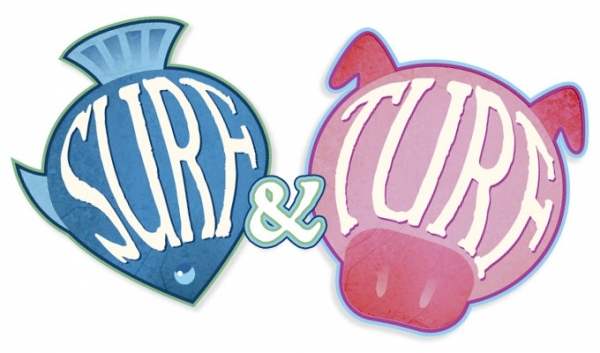 Get a copy of SURF, a copy of TURF, the Surf and Turf Promo Pack, and all unlocked stretch goals! 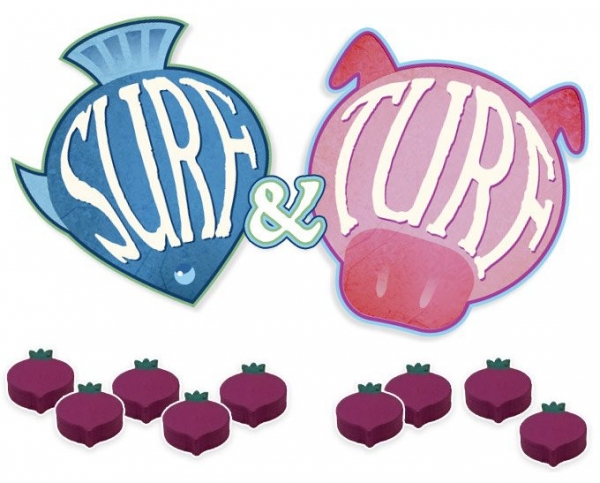 Get a copy of SURF, a copy of TURF, the Surf and Turf Promo pack, all unlocked stretch goals, AND a pack of Kickstarter exclusive wooden turnips and a metal chicken coin! 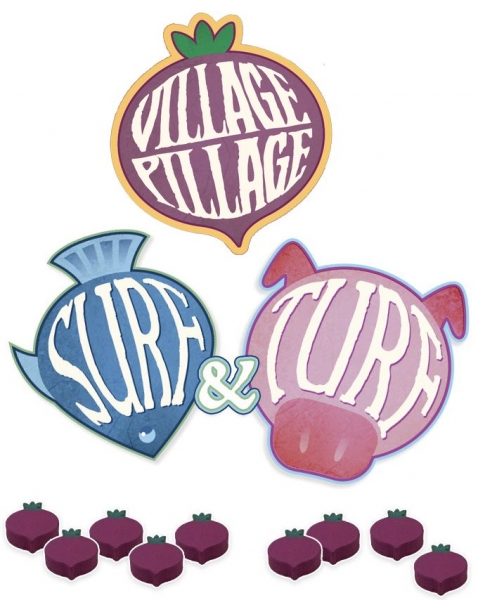 Get EVERYTHING! The original Village Pillage game (plus promo pack), the new SURF and TURF expansions (plus promo pack and all unlocked stretch goals), and your very own set of wooden turnips + a metal chicken coin!